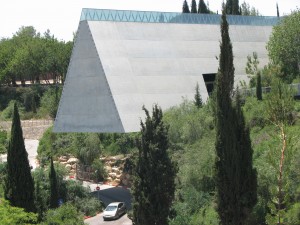 The visit to Hebron was a difficult one. Witnessing the effects of Israeli settlements on a Palestinian community was difficult. Seeing some of the ‘propaganda’ used to justify the existence of settlements was frustrating and caused a degree of anger.

But it never takes much in Israel to be reminded that the picture is enormously complex. Not every Jew agrees with what is happening in such places. ‘Settlers’ are not always representative of the wider community and culture. Indeed, they are often the more idealistic ones who have, often, been encouraged to return from other countries to reclaim their ‘birthright’. It is not a simple Jew v Moslem debate.

Added to this mix is the very recent history concerning the way Jews have been treated and how global events have manipulated and influenced the present state of affairs. There are many countries and governments complicit in present, unsatisfactory situation.

Perhaps one of the most emotive events in recent history is the Holocaust and it is a memorial to this event that Yad Vashem stands. The photograph shows the end of the main exhibition hall. Its triangular construction represents the coloured triangular patches of cloth which were sown to garments, in combinations, to represent the ‘crime’ of the wearer. The exhibition hall is just one part of the memorial though. The memorial park itself is huge and houses gardens of remembrance for various groups and ages. There is, for instance, a memorial garden to remember the children who suffered and died in the Holocaust.

There is no doubt that a wander round Yad Vashem is thought-provoking and not a little uncomfortable. The exhibition is exceptionally well done without ever coming across as grisly or voyeuristic. It is, nevertheless, extremely hard-hitting and it’s no wonder that it is a site visited regularly by Israeli conscripts. Near the beginning there is a potted history of anti-Semitism and not just in a Nazi context. It’s a stark reminder of how persecution and hatred of a group can become systemic and unquestioned. Then, only when blatant atrocities are committed are such things questioned. I would hesitate to suggest that such a style of presentation is intended to develop a ‘victim’ complex and to lay a guilt-trip on everyone else, but it certainly leaves a taint in the mind and a bad taste in the mouth.

What is unquestioningly powerful though is the collected testimonies of survivors and victims. Seeing the emotions on the faces of survivors speaking their story to camera and reading the words of diaries and letters and even journals and poems cannot leave anyone unmoved.

Strangely, though, it was not these that had the greatest impact on me, harrowing though they were. There is a room in the exhibition which holds records. The room is cylindrical, maybe 12 metres across and 6 metres high. You walk into a central, raised viewing platform. You are surrounded by box files. These are the records of those who died and were presented at the Nuremberg trials. Seeing millions of lives condensed to plain boxes of paperwork was deeply affecting. It was, in a sense, soul-less. These records are an inadequate witness to the millions of victims. In and of themselves they are just bits of paper – in that sense soul-less. And yet, what they represent is the destruction of human life on an unprecedented scale, made worse by the fact that this was not simply a by-product of war, but a deliberate targeting of and attempt to exterminate specific groups of people (and, of course, not simply Jews). The very soul-lessness of the room and the records was a stark reminder of how dehumanising the treatment of Jews and other targeted groups was. When all someone is is a label, a coloured classification, then a paper record is all they are.

I find this difficult to write about. Words are inadequate to express such outrage and to draw contemporary parallels would be to open a floodgate that would, it seems, be overwhelming. And yet, even in such bleakness, there was hope. Another exhibit room records many of the acts of those who did speak out, who did put themselves in danger to stand up to the oppressors. Many were people of faith; many were great humanitarians; many were simply supporting friends and neighbours.

There is, of course, a supremely contentious lesson to be drawn from such a visit. When you read of Jews being excluded from areas of towns and cities, when they are not allowed to walk in certain areas, when they are treated as something less than human, it is difficult not to draw contemporary parallels. I don’t feel brave enough to dive into them here. Nor do I claim to have any kind of deep understanding of the complexity of issues involved. Yet, in my naivety, or simplicity, I can’t help but wonder…

Maybe it’s best not to go too far down that road, but rather, consider its impact on what our response ought to be. It’s easy to condemn, or point fingers, or play the ‘blame game’. It’s easy to get sucked in taking sides, seeing everything as black and white. I find the work of EAPPI and others of that ilk to be an enormously powerful way forward. They stand in witness to the humanity of all and call for that humanity to be recognised and respected. Unravelling the historical, political, religious and cultural issues surrounding the situation in the middle east is beyond most of us. But acknowledging the humanity and worth of others is eminently within our capabilities. And it is something which doesn’t just have application in places like Israel and Palestine, but can find a place much closer to home too.