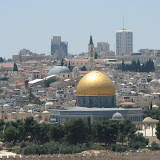 We were especially privileged on our trip to have with us some excellent guides and thanks to the scholarly contacts of one of them we had an invitation to visit the mosques which now sit atop the Temple mount in the old town in Jerusalem. The most famous is perhaps the Dome on the Rock with its stunning golden dome blazing in the sun. (Although, I suppose it might be more correctly named a shrine rather than a mosque.)

But this is just one of three significant mosques on this site. Another is the Aqsa Mosque, the main site for Friday prayers. This sits on the southern edge of the Temple area and above another mosque – Solomon’s Stables. The story is that when the Moslems gained control of the site they were so impressed by the Temple remains that they assumed Solomon must have had supernatural help to build. The ‘stables’ – a huge colonnaded (not sure if that’s the correct architectural description) area under the site – must have been where Solomon stabled the Djinns needed to move the massive blocks of stone. The irony being that the huge blocks were a legacy of Herod the Great, not Solomon.

The three mosques are not generally open to idle visitors. Nevertheless we were allowed access and were able to photograph what we wanted. In some respects Solomon’s Stables is the least impressive of the three – at least in the sense of ornamentation or fittings. But it is an absolutely enormous space (the photos – the ones of the space with the red and silver-striped carpet – simply don’t do it justice), stunning in its size. The Aqsa mosque is also an enormous space and has some beautiful features. It was fascinating to watch the birds wheel about inside, so large and airy it is. In the photo album, it’s the building with the red, chequered carpeting.

Sadly, the Dome on the Rock was undergoing extensive repairs and refurbishment so the area above ‘the Rock’ (believed to be, variously, the site of the Holy of Holies, or where Abraham was to sacrifice Isaac, or where Muhammad left the earth) was shrouded in scaffolding and panelling. There are some photos of the interior though showing some of the beautiful features.

But all of this can be looked up in a guide book or online and you’ll find a lot more information and better photos than I can ever provide here. The Haram is a beautiful place, with tree-shaded walks and beautiful architecture. It also houses a project which is restoring ancient manuscripts through very skilled and painstaking work. Groups sit around studying the Quran – and it was noted that there were many more study groups of women to be seen now.

But the place is at the heart of the disagreement between Jew and Arab. For each, the site is central to their faith (albeit not of the highest importance in Islam) and, as such, is crucial to their identity. Giving up the site would be like denying who you are. I think it’s this that Western culture doesn’t ‘get’. Listening to groups of US Jews being guided to the Western Wall, it was clear that so much of their personal identity is wrapped up in their national identity which, in turn, is wrapped up in their faith identity. And core to that is the holy site of the Temple. It is from there, that the sense of identity flows. One is left with the impression that without agreement on the Temple area there will never be agreement on any other aspect of the relationship. And it’s difficult to see how the issue of the Temple can ever be resolved.

For many Westerners, it’s just ‘a place’. Places have no true importance. Of course we have emotional attachments to places – just think of the hurt and anguish caused by a suggested union of two congregations here. But, ultimately, a place is just a place; a thing of bricks and mortar, of wood and tiles. Certainly for the (Western) Christian faith, a believer’s identity is not in a place, but in the person of Jesus.

But I wonder if we also miss a little something in our poor understanding of the Jewish or Muslim faith (and perhaps even the Christian faith). When we place our identity entirely in a person, we can overly personalise our faith. We forget that Jesus was not an individual, but a person of the Trinity, and so inherently part of a community. When our faith is too ‘personal’ we cease to be a part of a community and our ‘identity’ is diminished. Furthermore, that community has a place, both in the sense of its own place in wider society, but also a place where it can gather as a faith community. I think that when we know our ‘place’, within a faith community and within a wider community, then we can more fully serve and live our faith, for we understand its place in our life and in the life of those around us.