Day 4 saw us up bright and early – well, early, but probably not too bright. The reason for the early start was that we had a lot of ground to cover. We were travelling from Jerusalem to Tiberias on the Lake of Galilee, via Masada, Qumran and a quick dip in the Dead Sea. 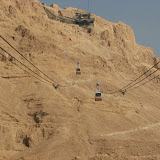 After a trek through the impressive, but somewhat featureless desert to the East of Jerusalem, we arrived at Masada. Masada means ‘rocky promontory’ and this particular ‘Masada’ had a rather civilised cable car to take us to the top. That didn’t stop some of the more adventurous members of the group from walking up the ‘Snake Path’ – presumably so-called because it snakes up the 400-odd metres of precipitous cliff-face to reach the top. The top of Masada is more or less flat and is home to various ruins. Even at this height it is only 33 metres above sea level.

Its primary attraction lies in the history of those ruins. At one end of Masada lie the multi-tiered remains of Herod’s Palace (one of many dotted around the country). As a country retreat for a rich and famous despot it has few equals. That Herod is the Herod the Great of Biblical fame, although there had been fortifications on the site from around the 2nd century BC. 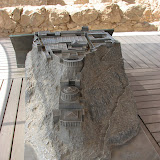 But what makes the place so famous is that it was also the site of a 2-year siege. After Herod’s death, Masada was used by the Romans, but in 66AD it was captured by the Jews in their first revolt against the Romans. The Romans first dealt with the Jews in Jerusalem (resulting in the destruction of the Temple in 70AD) then turned their attention to the remnants. Held by fewer than 100 defenders, Masada held out for 2 years under siege, finally succumbing in 73AD. The Romans breached the wall by building a massive earthen siege ramp on the western side.

According to Josephus, the Jewish historian, the remaining Jewish defenders, rather than be killed by the Romans, chose to commit suicide after first dispatching their own family members. The oath, “Masada shall not fall again” is part of the swearing-in oaths of the present-day Israeli army. Kind of sums up so much, really, and is a remider of just how much history influences a culture and people. 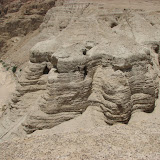 Qumran was the next stop. Despite its somewhat unassuming and even bleak appearance, Qumran is probably one of the most significant sites in the history of Biblical studies. It is where the Dead Sea Scrolls were discovered. Useful not just for their confirmation of ancient Biblical texts, but significant for the differences they contain, the scrolls were under the safe-keeping of and Essene community – a community which lived by a ‘rule’, not dissimilar to the way communities of monks would live. Property was shared and other distinctive ‘rules’ were followed. Again, like later monastic traditions, not all such communities followed the same set of rules and differences existed.

The focus on communal living and care for one another has given rise to speculation that Jesus’ teachings were widely influenced by such ‘rules’, but there is no great evidence to support that and Jesus’ teachings contain significant deviances from what is known of the Essenes. Perhaps a greater link could be made to another Biblical character – John the Baptist. Again, though, it is more a matter of speculation than any hard evidence existing.

The two sites are visually stunning. Sitting in a desert land, it isn’t hard to imagine how difficult life might be at particular times of the year. Being at the mercy of the life-giving rains meant that Masada, in particular, had some ingenious water storage schemes. The heat is intense, perhaps because of the land sitting below sea level. When you consider settlements like Qumran then it may have been only sensible to ensure such communal-living was ‘formalised’. It ensured that the community was equally supported from the resources available. And the presence of so many scrolls indicates that the community was far from primitive. Life may have been harsh and even basic, but the community was no illiterate bunch of savages. This was an educated and dedicated group of people who understood the significance of the manuscripts they had in their possession.

The day also included the somewhat bizarre experience of going for a swim in the Dead Sea. Actually, swimming is not recommended. The very high levels of salts makes the water extremely unpleasant if you get any near your mouth, but that same dense solution means that you bob around in a most strange manner. You can practically sit on the stuff. Still, it made the swim in the Pool at the Scots’ Hotel in Tiberias all the more welcome when we eventually arrived.